SpongeBob did it! So can you!

The announcers voice rang across the tournament floor:

WOW! I bet you want two gold medals hanging around your neck, huh? Want to know how? I’ll show you! But first, let’s look at what we can expect during the tournament.

There are two parts to TU Taekwondo competitions: Forms and Sparring. In the Forms competition, each competitor will be called up individually to do their form and they will be judged on a scale of 5 – 10, with quarter increments (e.g. 6, 6.25, 6.5, 6.75). However, to help the judges get a base line, or average, score, the first three competitors will be called up to do their form without getting scores immediately upon completion. Instead, once the third competitor finishes his/her form, the original three will line up and will be scored individually based on their individual and  competitors’ performance. Every competitor thereafter will be scored immediately upon completion of their form. The highest overall score wins. In the case of a tie, both competitors will do their form and be scored after (kinda like the first three), and will use two whole numbers (e.g. 7 and 8, 8 and 9).
The sparring competition is completely different than the testing sparring we do in class. The round is a minute and a half and the winner is the one with the most points. The objective of the round is to punch your opponent in the stomach or kick them in the stomach or head. When a point is made, one of the three judges will yell “break” and the competitors are re-centered. The center judge (they are the head judge) will call for points, at that time all three judges will point in the direction of the competitor who they think gets the point. If a competitor gets two judges pointing in their direction, that competitor is awarded the point(s). The same rule goes for warning, two of the three judges have to had seen and called a warning in order for a competitor to receive a warning. The point system is as follows: 1 point – kick or punch to the body. 2 points – kick to the head. There is one additional point added to a kick for a spin, and another additional point added to a kick for a jump. Three warnings are given. The first warning given gives the opponent a point. The second warning given gives the opponent two points. The third warning given ends with that competitor being disqualified. In the case of a tie, a second bout is started and the first point to be scored wins.
Now, HOW TO WIN GOLD1
First and for most, come to class! Weeks leading up to the tournament, the mindset of all the instructors is to get the students ready for the tournament. If you aren’t coming to class, then your chances of doing well in the tournament are slim.
When it comes to forms, every judge is different in how they score forms. With that said, there are a few qualities about a form that appeal to the judge’s eye (besides doing the form correct). One of the most important qualities is stances. This is always stressed in class when doing forms; “make great stances!”. As a student, you should be paying particular attention to STANCES, and not just doing the form right. If two cometitors do the form correct, and one have phenomenal stances while the other doesn’t, it is going to be easy to decide the winner. A few other points to consider are power and timing. Power is simple (actually, not as simple to execute as you may think). Punch, kick, and block strong. Imagine trying to fling mud off of your uniform, that might help point what “power” is in perspective. Timing is a bit harder and requires a lot more practice and deliberate attention. Having an even cadence with each move makes the form look a whole lot better, and that score card a whole lot more appealing.
If you do these three things, your chances of winning the forms competition is a whole lot better! Now…..how can you win the sparring portion? Two factors determine success: Combinations and speed.
“WHAT? YOU SAID COMBINATIONS?” Yes...well no, I didn’t say it, I typed it, and you read it. But nevertheless, the best way to score a point is to do combinations, the same thing that I stress to the students every time they spar in class. The fact is, one technique is hard to score with, chances are it is going to get blocked. However, a barrage pf kicks and punches are bound to score, the human reflexes are not quick enough to keep up with someone else’s intentions.
Let’s look at speed. This is very obvious. If you are quicker than your partner, than chances are you will win. That does not mean you need to go do wind sprints to develop speed. You are already quick enough, you just don’t use your abilities. Be light on your feet, bounce around and don’t stay in one place. If your opponent throws a kick at you, be quick to block and counter. If you throw a punch as a counter, you can easily score.

Well, thur yee go! So, what are you going to do? COME TO CLASS. Tournaments are fun, and they should be fun. You should enjoy them and if you need help to do so, you might try reading the last post “An experience that will be one for the books!” to get a perspective on why we compete.

And remember: Patrick is rooting for ya! And SO ARE WE!

An experience that will be one for the books! 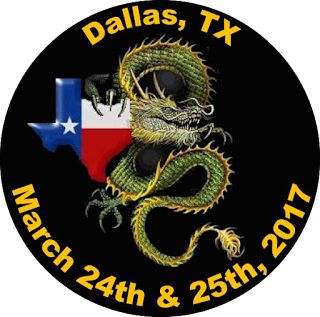 With the Dallas national tournament fast approaching, it is a critical time to ask us, “why compete in a tournament?” We at Strickland’s Martial Arts understand the importance of exploring the many reasons why it is beneficial to take your taekwondo skills to the competition floor.
Competing in a taekwondo tournament helps students to build confidence.  In tandem, the experience of competing in a tournament skyrockets students’ growth in martial arts. Additionally, a day of tournament offers families a bonding experience.
Competing in a tournament opens students up to learn about their potential and to build confidence.  In competition, a student learns that it is not always about winning or losing.
Its about celebrating the courage and bravery it takes to stand up and perform in front of a crowd of judges, while acknowledging that the process of showing up for the task is worth all the glory and praise.
In addition, students gain confidence in their winning success, and learn humility and humbleness in the moments they do not come out on top.  It is inevitable that all students will at some time experience both winning and losing in competition, this is part of the experience and will help them to grow as martial artists and as individuals. Winning or losing do not define you; it is how you carry yourself in both of these experiences that shapes your character.
Competing in tournaments helps to improve a students martial arts training.  Often students can become accustomed to the style and training of their specific academy.  While this is not inferior, it is important to remember that exploring the many varieties of training styles can inspire change in students’ determination and practice.  Pushing one’s own boundaries in a competitive environment can be eye opening and empowering for students, young and old.  Watching students from other academies can inspire students to elevate their own personal standard of their training.
Competing also teaches students how to perform under pressure and stress.  This is useful for developing grace, precision, and consistency in performance.
Finally, a day in tournament brings the entire family together to share a unique experience.  Parents and siblings find this opportunity to support the school’s competitors while gaining insight into the world of taekwondo competition.
The experience of watching a taekwondo class at the school is hugely different than sitting in the hustle and bustle of a national tournament.  The experience is thrilling and enlightening.  A day of tournament offers insight to the competitor, and by extension, to the families of our students.
A day in tournament is filled with fun and anticipation.


Overall, going out to compete in taekwondo helps to mold you into a better martial artist.  Much is gained and nothing is lost in this experience.  A new sense of confidence is acquired, many new styles of training are revealed, and a lasting memory is conjured.  At any age, competing in taekwondo is a worthy opportunity to gain under your belt!  See you at the nationals!
at 2:41:00 PM No comments: 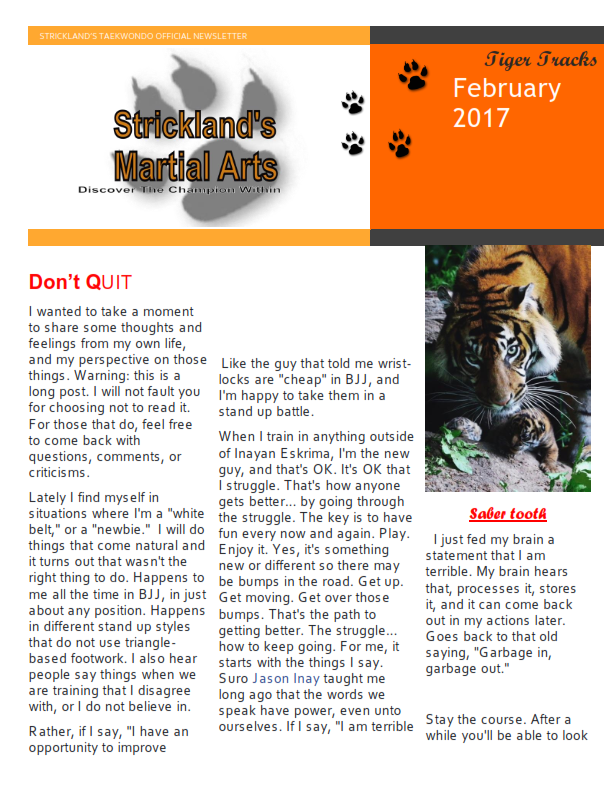 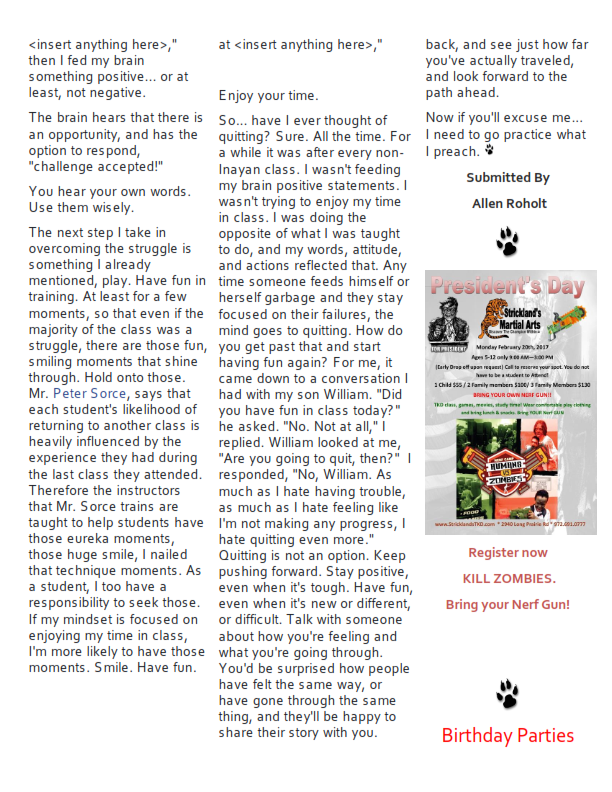 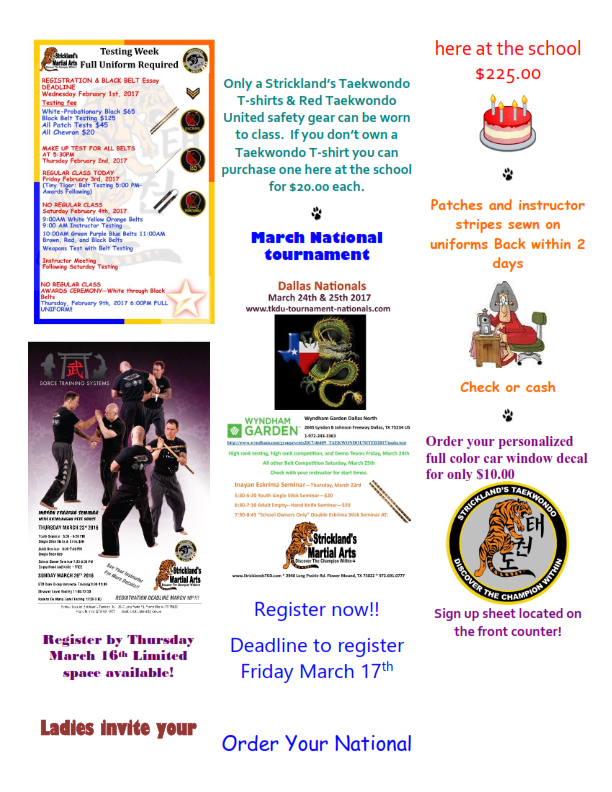 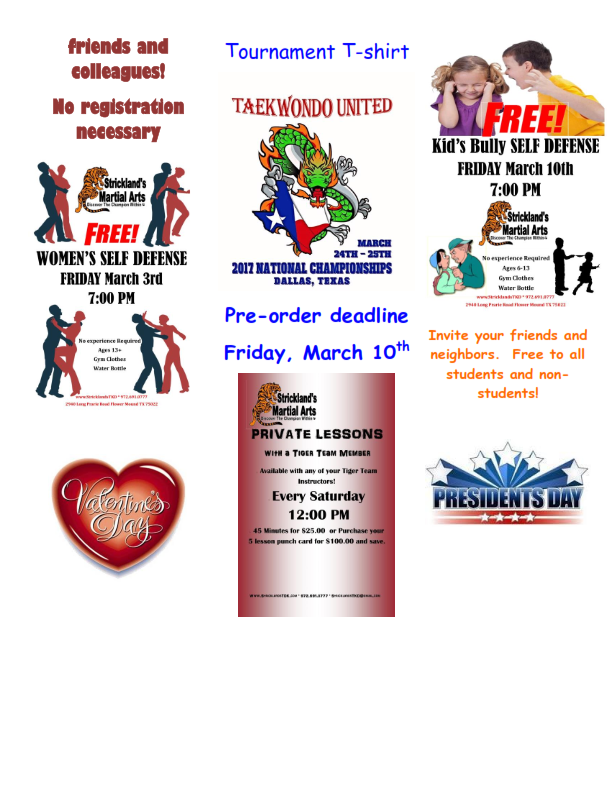 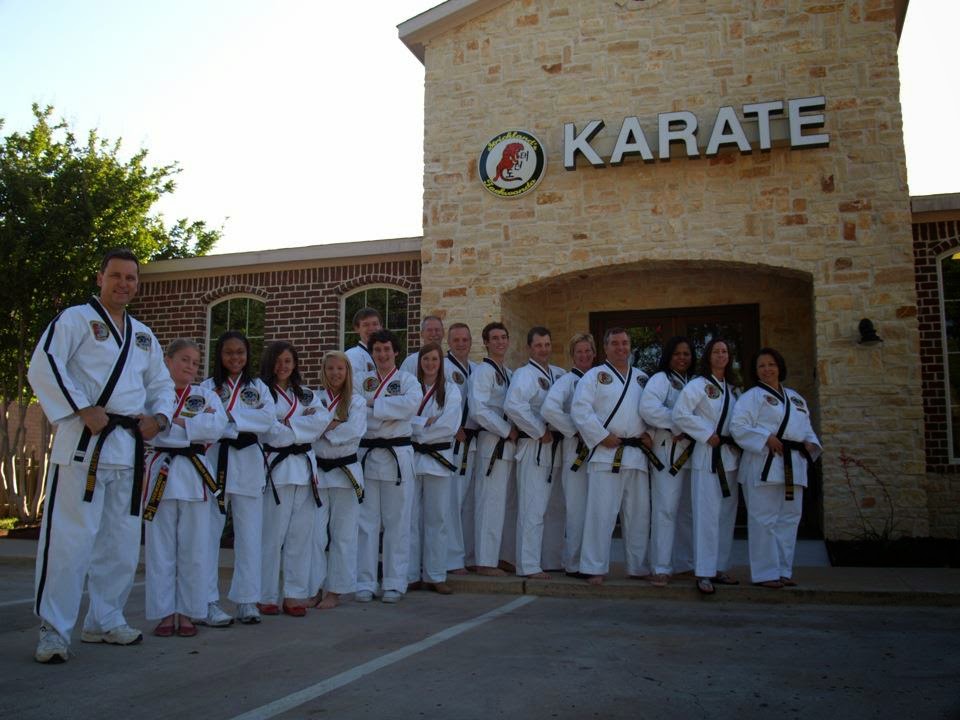